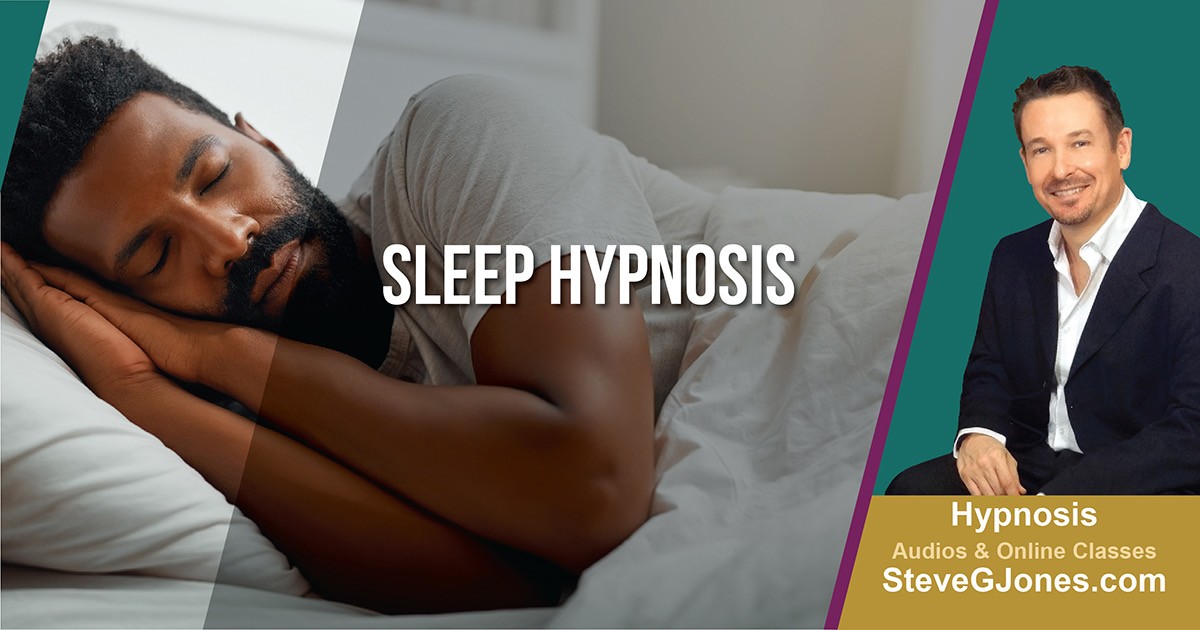 What Is Sleep Hypnosis?

Notes about the three steps above:

Experiments in sleep hypnosis may involve being hypnotized by someone who has received professional hypnotherapy training. Because you cannot expect to have a hypnotist in your room at bedtime, however, sleep hypnosis is practically realized as a form of self-hypnosis or being guided by a hypnotherapist through an app or audio recording.

Is Hypnosis A Form of Sleep?

There has been some question as to whether sleep and hypnosis are one and the same. After all, it is not uncommon for someone being hypnotized to fall asleep during an induction procedure. Often, when you look at someone who is in a hypnotic state, they look like they are sleeping. After hypnotic induction, many people claim that it felt like they were napping. In addition, brain waves during hypnosis can mimic parts of the sleep cycle. During hypnosis, an EEG will pick up theta waves, which occur during stage two and parts of REM sleep.[2]

Although being in a hypnotic state seems similar to being asleep, they appear to be physiologically different states.[3] Hypnosis is actually a form of heightened concentration as compared to the lack of concentration associated with sleep. Despite some similarities in brain function, hypnosis is characterized by waking EEG patterns; as opposed to the patterns you see when someone is asleep. Still, they do share some commonalities. It appears that the ability to achieve deep hypnosis and the ability to fall asleep share some common mechanism: “Hypnotizable subjects may be able to fall asleep easily and, in general, may possess an ability to maintain control over sleep processes and cognitive activity associated with sleep.”[3]Overall, we can say that the processes that guide sleep and hypnosis are different, but share some similarities.

Does Hypnosis for Sleep Work?

Because of the prevalence of sleep problems, or challenges, as I like to call them, it is not surprising that alternative treatments, such as hypnosis, are being explored. Medication and Cognitive Behavioral Therapy (CBT) are often used to treat insomnia, but they have their drawbacks. For example, in many cases,  people do not want to deal with the side effects of medication or have to change their pre-bedtime habits.

Hypnosis  to fall asleep and stay asleep is an attractive intervention, because it is easily administered and has few, if any, negative consequences. In a comprehensive review of research involving hypnosis, approximately 58 percent of participants in studies reported a positive effect of the hypnosis intervention on sleep outcomes.[4] Additionally, it appears that the benefits were accomplished relatively quickly, over only a few sessions. The following three sections examine different ways in which sleep hypnosis can be used. We will examine the use of sleep hypnosis with a hypnotherapist, by yourself (self-hypnosis) and with cognitive-behavioral therapy.

Ways Sleep Hypnosis Can Be Used

In a small group study of six adult participants, hypnotherapy decreased insomnia for half of the subjects and the gains were maintained for at least 16 months.[5] And in a study examining PTSD subjects with insomnia, providing hypnosis for three hours a week for two weeks found results as effective as medication for the amount of sleep obtained. In addition, subjects have reported that hypnosis yielded better sleep quality and fewer hangover effects than medication.[6]

In a study of children reporting difficulty falling asleep, 90 percent reported a reduction in sleep onset time following self-hypnosis. Fifty-Two percent of children who were frequently waking up in the middle of the night stopped waking up altogether, until morning, and 38 percent reported some improvement.[7]

Among 45 adult participants, the use of four 30-minute sessions to instruct self-hypnosis, relaxation and sleep hygiene education was found to be more effective in treating insomnia than stimulus-control methods or placebo therapy.[8]

Cognitive-Behavioral Therapy (CBT) on its own has been found to work well in reducing insomnia.[9] Techniques such as stimulus control and sleep hygiene education are commonly used CBT methods to help achieve sleep. In fact, CBT-I, a specific CBT protocol, has been developed for treating insomnia. As a simple behavioral technique, much like relaxation exercises, hypnosis can easily be added to any CBT protocol.

Researchers Graci & Hardie, for instance, found preliminary evidence which suggests that the use of hypnosis and Cognitive Behavioral Therapy (CBT) together can reduce sleep problems.[10] Additionally, in a case study conducted by Perfect and Elkins[11], they found that CBT techniques combined with direct and self-hypnosis significantly increased total sleep time and sleep efficiency (number of minutes reported sleeping divided by the total number of minutes reported in bed).

Cordi, et al.[1] found that listening to a pre-recorded audio hypnotic suggestion to “sleep deeper” was positively associated with maintaining longer SWS (slow wave sleep). This type of sleep is important in the formation of memories, since it is during SWS that memories move from the hippocampus (short-term memory storage area) to the neo-cortex (long-term memory storage area). The process is known as systems consolidation. This finding demonstrates the usefulness of hypnosis for memory improvement.

As a result, it could be hypothesized that you need to possess high levels of hypnotic suggestibility for sleep hypnosis audio recordings to work. Fortunately, someone seeking help with sleep through hypnosis audio recordings is at the very least open to the promise of hypnosis treatment. Unfortunately, there is no definitive way of knowing if you are highly suggestible, unless you see a hypnotherapist or undergo hypnotic suggestibility testing.

There do appear to be some advantages of using hypnosis as a sleep-aid. First, it appears to work rather quickly, sometimes in as little as one to two sessions. It is also safe with no reported negative consequences. The research that has been done appears to indicate that it helps with sleep quality, including an increase in slow wave sleep.[1] Additionally, there is some evidence that it helps with both falling asleep and staying asleep.[7] Finally, once learned, it can be done on a self-help basis with little cost or inconvenience.

It is not very often that a promising treatment can be conducted easily with so few negative consequences. For that reason alone, further research needs to investigate the use of sleep hypnosis as a complementary and stand-alone treatment. It has already been accepted that it might serve as a valuable addition to CBT techniques, such as sleep hygiene education.[10] With more research, its further use as a primary and complementary intervention for sleep challenges may be revealed.